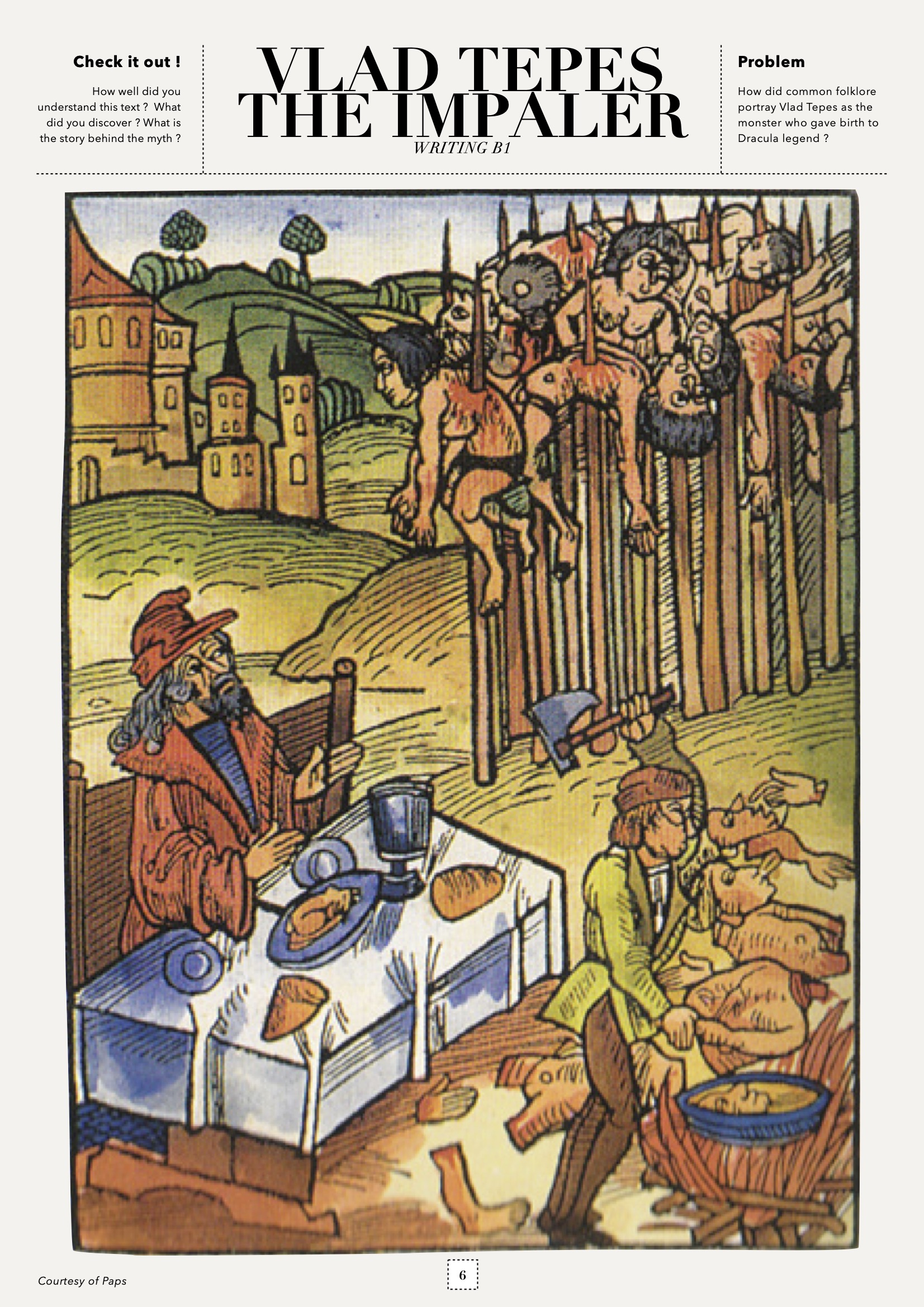 Let me present this document. It’s an engraving, made by Ambrosius Hubert in 1499. There is no title but I can deduce it is linked to Vlad the impaler.
Indeed, before going any further, I believe we need to discuss who Vlad was. Vlad Tepes the impaler was born in 1431. Vlad III was nicknamed «Dracula » which means « Son of the dragon » because Vlad II, his father, was a menber of the Order of the Dragon. He was a Christian and he had to protect Christianity in Eastern Europe. He hated the Turks because he was their hostage when he was eleven years old. I can imagine this is one of the reason of his hatred and his sadistic behavour towards Muslims.

Let’s move on to a description of this work of art. In the top left hand corner, I can see a castle among hills. I imagine that this castle belongs to Vlad the imapler and in the top right hand corner, still among hills, I can also see several people impaled on huge stakes. A lot of blood flows from the bodies. I am assuming they must be Vlad III’s victims so I can take an educated guess and assume they were Muslins because he hated them and had to protect Christianity.
In the bottom right corner, there is a man with an axe who is chopping off human bodies and I can even go as far as wondering whether he is cooking these bodies. That would be quite gory…

There is a dark atmosphere because cutting bodies is scary, it’s not pleasant to see. In the bottom left hand corner, I see a noble-looking man. I guess it is Vlad Tepes because the engraving represents Dracula and his victims.

There is a dark atmosphere because he is litteraly having a feats next to impalled bodies. It’s very odd. I didn’t like the engraving beause it too bloody and scary. I can understand though, why Bram Stocker was inspired because this story was terrifying and very bloody.

Let me present this document: this is an engraving which we don’t know the title of. It was made in 1499 and it was realised by Ambronius Huber. This engraving bears upon Vlad the Impaler who was born in 1431 in Wallachia, Romania. As a matter of fact, you can probably find this engraving perhaps in a museum in Romania.

Now I am going to talk about Vlad the Impaler aka both Vlad Tepes and Dracula, is the child of Vlad II who is a member of the order of the dragon. His father had to protect christianity in eastern Europe because he was christian like is children. Vlad Tepes became an hostage at 11 years old and, as a consequence, hated the turks who captured him.

Vlad Tepes became prince of Wallachia when he was 25 years old and begun to considered himeself as a tyrant. His favorite method of excution was empalling his victims and he killed between 60 to 100 thousand people.

Now, moving on to a description of the engraving. In the top left hand corner, there is a huge castle and I assuming this was the castle of count Dracula, located in Transylvania, in the north western part of the country. In the right hand corner there are the victims of Vlad Tepes, who was famous for just empalling them on wooden poles. I can’t know for sure but I suppose they are Turks, as he was probably feeling really revengeful after being held hostage for so many years. In the middle, on the left, we can see Vlad Tepes who feasting on poultry and bread with his hands wide open just like Jesus Christ was represented at his last supper. I find this Christ-like representation very odd, considering the crualty of the scene behind him. Vlad wanted to protect christianity even if it meant blood had to be spilled.

In the bottom right hand corner, there is a servant who is chopping off corpses with an axe before throwing them into the fire. The colors display a constrat between the warm atmosphere symbolizing death and danger through both fire and blood and the white linen table cloth which is a symbol of purity and wealth.

This piece of propaganda was probably meant to portray the Prince as a hero who saved christianity, but who was, nonetheless, a heartless tyrant with questionable methods.

Now I know why Vlad Tepes inspired Bram Stocker for his character Dracula. Indeed, rumour had it Vlad was drawn to blood even that it made him hungry on the battle field. Didn’t Bram’s Dracula suck blood to keep on « living » ?

Let me present this document ; well obviously it is an engraving. It was made back in 1499 and it was engraved by Ambrosius Huber. This engraving bears upon Vlad the Third feasting facing the Turks (the defeated).

Indeed, Vlad III was known as Dracula, son of Vlad II Dracul, and was a member of the Order of the Dragon. After the fall of Constantinople, he was then supposed to protect Christianity. Vlad was a famous tyrant taking sadistic measures in torturing and killing his enemies : legend has it, he would even feast in forest of stakes.

Now, moving on to a thorough description of this work of art. In the foreground, on the left, you can see Vlad the Third sitting on a wooden chair, at a table covered with a white linen table cloth. I can see a couple of silver plates, a dish of meat, two slices of bread and a big gobelet. In front of him, in the bottom right hand corner, there is a servant who appears to be chopping corpses off with an axe and boiling them up in a pot above a fire. He is surrounded by lots of body parts. It is quite dreadful and gory. In the middle, on the right, there is a forest of stakes with empaled bodies on each of them. In the background, stands an old gloomy castle.

If the noble sitting is actually Vlad III, then I can imagine the castle is probably his ; and on the stakes, it must be the Turks, after a war against him, after Vlad defeated them. The servant in the bottom right hand corner is burning the Turks’ corpses to do the prince’s bidding ; we don’t really know for sure, and we don’t want to know…

I am assuming Vlad is pretty wealthy, obviously, because he is feasting on a white linen table cloth in the middle of the 15th century in Romania, that seems very clean and that points out to his nobility. So we can guess he was all powerful and was financially well-off (even rich, according to the huge castle in the background). This being said, I am assuming the bright and spotless white of the table cloth contrasts heavily, with the warm colors of blood and fire. Death and wealth are pictured closely together here.

To conclude, I understand why Vlad Tepes inspired Bram Stoker’s Dracula because both of them are sadistic protagonists and both had a lot of power and money. Indeed, rumour had it, that the sight and the smell of fresh blood made Vlad hungry on battle fields. Hence this depiction of him after a victory. This idea of blood-thirst, links him directly to Bram Stoker’s fictitious character, the most famous vampire ever, Count Dracula. 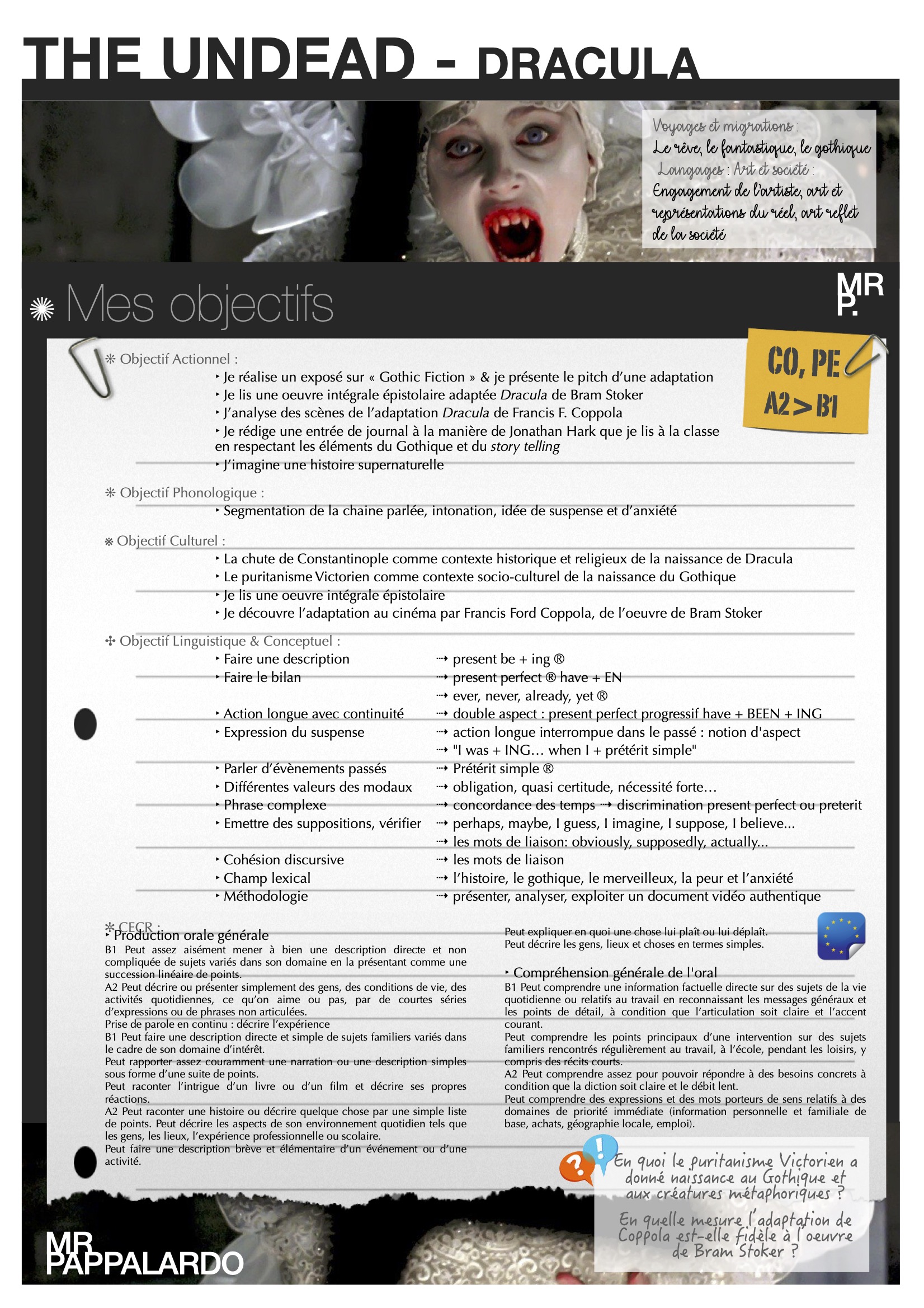 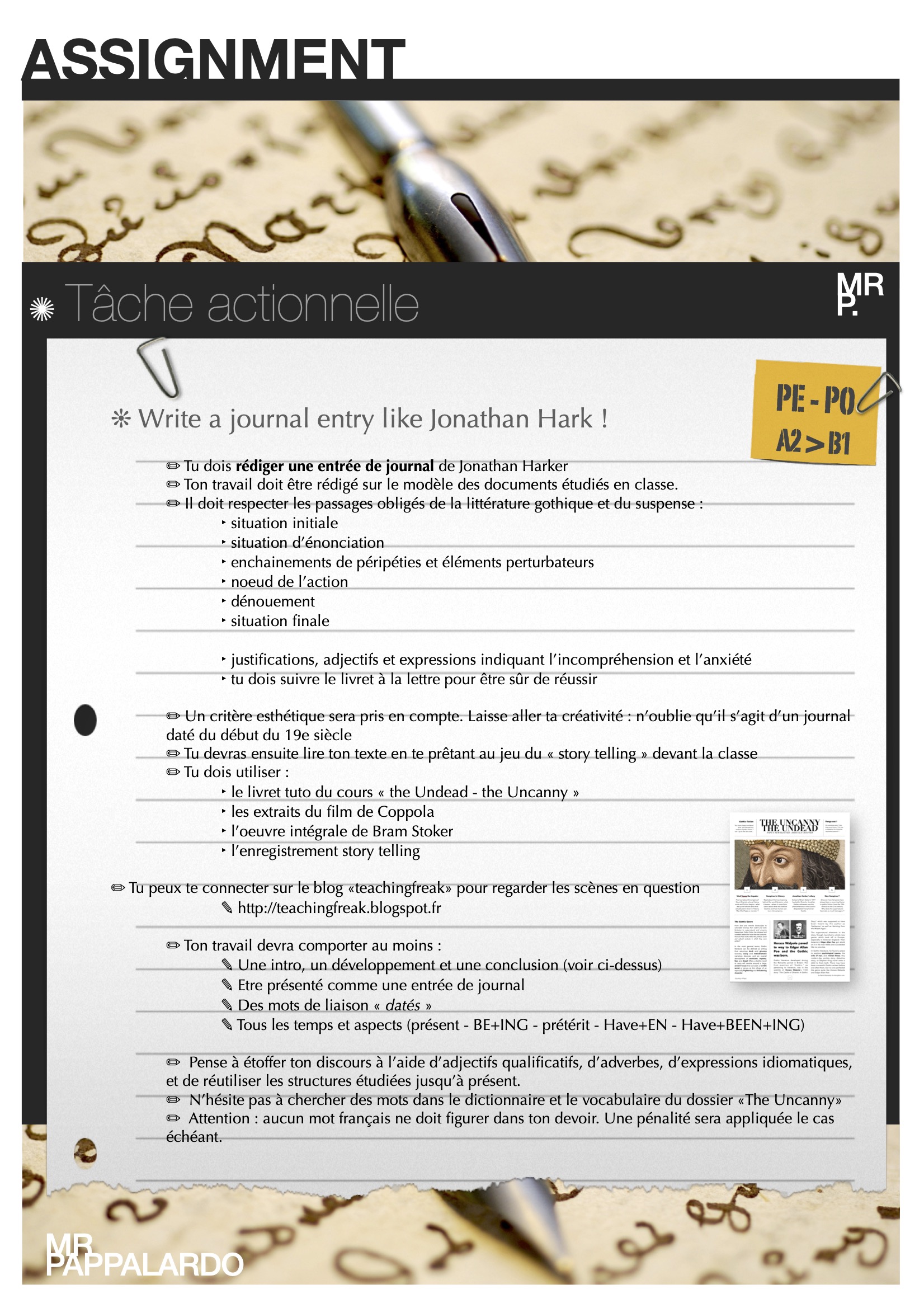